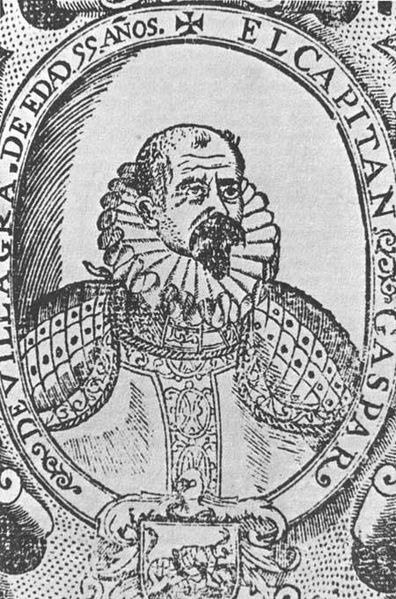 Gaspar Pérez de Villagrá (1555–1620) was a captain and legal officer (''procurador general'') in the Juan de Oñate expedition that first colonized Santa Fe de Nuevo México in 1598. Between 1601 and 1603, he served as the ''Alcalde mayor'' of the Guanacevi mines in what is now the Mexican state of Durango. He is better known for his authorship of ''Historia de la Nueva México'', published in 1610.

He was born in Puebla de Los Angeles, New Spain. His father, Hernan Peréz de Villagrá was a Spaniard while his mother's identity remains unknown. He received the opportunity to study in Europe and received a bachelor of letters degree from the University of Salamanca in the early 1570s, where he studied Greek and Roman historians and rhetoricians after which he returned to New Spain. Provided by Wikipedia
Showing 1 - 1 of 1 for search: 'Pérez de Villagrá, Gaspar', query time: 0.04s
Search Tools: Get RSS Feed — Email this Search —
Loading...